The “curse” of second place continues.  This makes it the sixth straight time that the player with the second ranked chance by my system won the game.

Terry O’Shea may have been extra choosy in her clue selection, but her 100% precision and her tendency to score rebounds off of the others still gave her a strong showing.  Jared Hall and Julia Collins played very similar games, but Hall found all three Daily Doubles.  Had he converted his all-in wager early in Double Jeopardy, the result may have been a lot different.  Instead, Julia played up to the expectations placed upon her, and became our first Finalist.

Hall, as lampshaded by Trebek at one point, was the only player playing tonight who picked clues from the middle of the board at first, hunting for the Daily Double.  He was rewarded handsomely for his efforts, as all three Daily Doubles landed in his lap.  The first and third were rather straightforward efforts, with Hall having less than $1,000 in the Jeopardy round and $2,000 in Double Jeopardy, which almost always necessitates the maximum wager allowable wager of $1,000 or $2,000, depending on the round.  His second Daily Double, however, I think deserves some extra attention.

Hall had $4,200 early in the Double Jeopardy round, poised between Collins’ $6,800 and O’Shea’s $3,000.  The Daily Double was hiding in the $1,600 clue in the category Great American Novels.  The average player would probably pick a middling value without too much thought, probably about half their score or less.  Hall did what I imagine most good Jeopardy players would do, and bet it all.  There’s still enough money left on the board ($27,600 out of the $36,000 that started the round, as well as the other Daily Double) that even if you go bust, there’s still enough time to make a comeback.  And if you respond correctly and double up, you’ll have a lead and be well poised for the rest of the game.

I’ve mentioned that I’m working on a system that evaluates Daily Doubles and determines the expected win % of every possible wager, trying to find the “best” bet, if such a thing exists.  It’s still very rough around the edges, but I thought I’d give it this situation to mull over.  Here’s what it said: 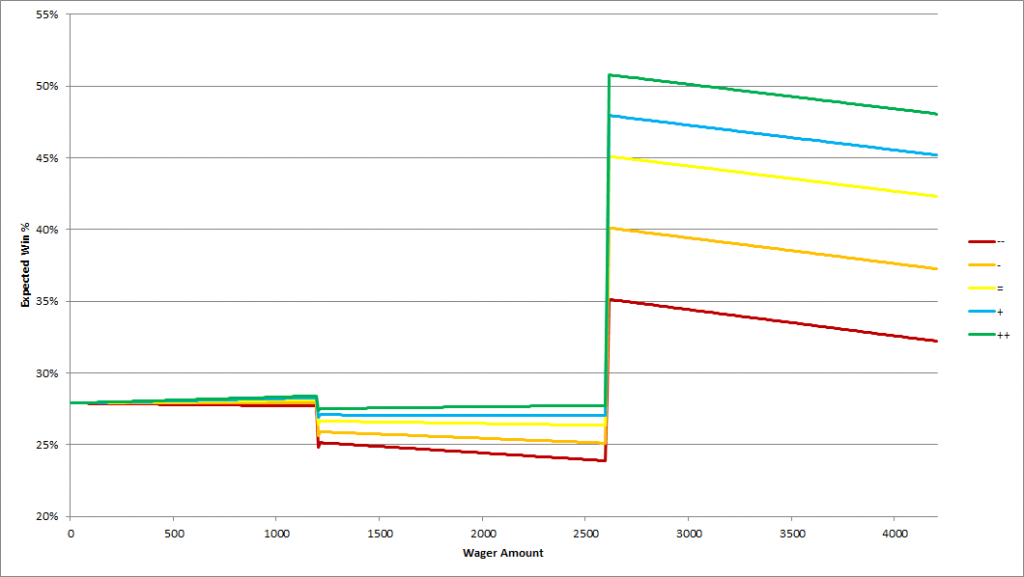 – $2,600+: Best. The benefit of being in first place if you are correct greatly outweighs the chance that you’ll be in third.  What’s interesting about this section is that your chances decrease as your wager increases beyond what it would take to get into first, indicating that perhaps what you gain by increasing your score above $6,801 is not worth what you lose if you by going further and further behind.  Like I said before, I don’t consider this system to be ready for prime-time, but it gives us something to think about: that a knee-jerk all-in bet in this scenario may be good, but not optimal.

Going into Final Jeopardy, it was still anybody’s game.  Collins led with $12,000, O’Shea had $8,200, and Hall was right behind them with $7,600.  This situation may look a little boring at first, but digging a little deeper into the math reveals a truly fascinating situation – and one that’s very scary for Collins, despite being in the lead.  Keith Williams of premier Jeopardy wagering blog The Final Wager has an excellent write-up and video detailing why, one that I highly recommend watching.

The producers of Jeopardy stop tape to give the players as much time as they want to calculate their wagers; Collins took 15 minutes to finally settle on hers.  In a cruel twist of fate, all of the strategizing proved moot, as only Collins was able to get the correct response in Final Jeopardy, and is our first confirmed finalist.  Well done to her.  She rode her luck a little, earning a wild card with a historically below-average score, and not getting any of the Daily Doubles in this match, but I don’t think anybody could begrudge her her place in the finals.

Collins moves up to the top by virtue of having secured her finals place.  The remaining players’ chances only moved a fraction of a percentage point – Collins’s stats were darn near close to the average expected stats of the player coming out of the first semifinal. 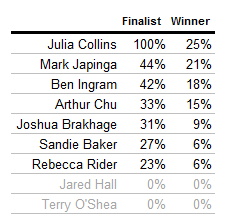 We’ll see if tomorrow will get us the final match that everybody wants to see: Arthur Chu vs. Julia Collins, or if Mark Japinga or Rebecca Rider will upset the storyline.