When you think about dice and game shows, the show you probably think of first is the Heatter-Quigley show High Rollers, hosted by Alex Trebek and his awesome 70’s fro for two separate runs on NBC, and then again by Wink Martindale in 1987. Through every incarnation of the show, the bonus round remained the same: the Big Numbers.  Based on the old gambling game Shut the Box, it heavily relied on luck, but also had some strategy in how you played it.  It also seemed extremely difficult, as players rarely walked away winners.  We wondered if the difficulty of the game was due to poor strategy, or if the game was simply stacked against the contestant.  To answer that question, we first had to figure out just what the optimal strategy should be.

The rules are simple enough. The contestant is faced with the numbers 1 through 9.  In order to win, they must eliminate each number, which they do by rolling two dice.  After each die roll, the contestant chooses from the numbers they have remaining either a number or combination of numbers that equal to the number rolled, which are then eliminated from further consideration.  If the contestant manages to eliminate all nine numbers before rolling a number that cannot be matched, they win the grand prize. 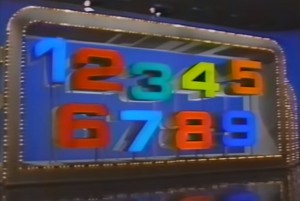 The Big Numbers board in the 1987 revival, in all its glorious 80s-ness.

Sometimes you can only match a roll one way.  But most of the time, especially in the first few rolls, you have several ways to match a total with the numbers remaining.  For example, there are 12 possible ways of matching a roll of 12 on the first roll!  Which of these 12 would give you the best chance of winning the game?

We decided to take a brute force approach to evaluating this game.  Since there are nine different numbers, and each number has two states (either still on the board or removed), that means that there are 512 (2 to the 9th power) possible combinations of numbers that you could be left with at some point during the game.  While that would be a large number to work out by hand, luckily we can make the computer do most of the heaving lifting for us.

First, we can trivially work out the probabilities of every situation where there are no choices to be made.  For example, consider the situation where only the number 7 is lit up and we have no insurance markers.  The only way to win in this case is to roll a 7. Seasoned gamblers would know that the chances of rolling 7 on a pair of dice is 16.66% chance, or ⅙.  However we have to remember that not all non-seven rolls will lose the game – a roll of doubles grants an insurance marker that we could immediately cash in.  That means that of the 36 possible rolls, 6 are winners, 6 let us roll again, and 24 are losers, which means the chances of winning are 6 / 30, or 20%.

Once we have these easy cases calculated, we can start working on the cases where we have a choice.  We used an iterative process for this.  We made up a list of all number combinations that we could not evaluate as above, and looked at each of them.  If we came up with a case where every option’s chances of winning had not yet been determined, we skipped it for the moment.  If we could figure out every choice’s chances of victory, we could then figure out which option would provide the greatest chance of victory, and then determine what the overall chances of winning were from that configuration of numbers.

After iterating through the list of unsolved configurations several times, we eventually discovered both the best strategy to use and the chances of winning from every possible combination of numbers.  From the starting position, where all nine numbers are lit and you have no insurance markers, you have a 17.1% chance of knocking all the numbers off. 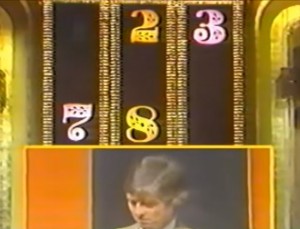 Can we make any characterizations about the best strategy?  In general, it seems that the best strategy is to remove the largest numbers from the board that you can from your roll.  This means that on your first roll, if your roll is less than nine, you should remove just the number you rolled.  If you roll 10 or more, you should remove the 9 and either the 1, 2, or 3, depending on if you rolled 10, 11, or 12.

I do say this is the best strategy in general, but there appear to be a large number of exceptions.  Say you rolled a five to start with, and took off the 5.  If on your second roll you rolled another five, you might be inclined, following the rule of thumb above, to knock off the 4 and the 1.  Doing this leaves you with a 7.01% chance of winning.  If instead you removed the 3 and 2, you’d have a 7.47% chance of winning.  This is just one of many cases where following the general strategy is not optimal.  We tried to figure out if there was a common thread to these exceptions, but nothing jumped out at us.  Even so, We would expect that a person following the basic strategy and ignoring these exceptions would probably only cost themselves a few tenths of a percent on their overall winning percentage.

If you’d like to play around with these results, I’ve included a little widget at the end of this post for you to play with.  Highlight the numbers remaining on the board and the number of insurance markers you have, and it’ll outline the best strategy to follow at that point, as well as your chances of victory.  Have fun!