You gotta hand it to Arthur Chu.  Despite being handed the toughest draw in the field, he’s making this look easy.

Mark Japinga’s negging and Rider being crowded out on the buzzer could have made this a runaway, but Rider doubled up on a good Daily Double, and Japinga made a late run to remain relevant.

I’ll admit – as soon as Chu wagered $1,000 on his first Daily Double, my bad-bet-o-meter went crazy.  He found it early in the Jeopardy round, having called for the $600 and $800 clues in random categories looking for it as is his M.O.  He was trailing Japinga slightly at the time, $2,600 to $2,800, with Rider yet to open her mouth. I loaded up my still-in-development Daily Double evaluator, and fed it the parameters.  Here’s what it spat out at me:

The five lines represent how comfortable you are with the category.  They have nothing to do with the expected difficulty of the clue, which has already been accounted for.  The table may be hard to read, but it suggests 3 wagers, depending on your level of confidence:

– $300-400 if you are not confident. Enough to take over the lead, but still enough to stay in touching distance if you miss it.

– $2,000 if you’re confidence is average. Beyond a certain point when you’re leading, every dollar you have is gives you a smaller chance of winning than the previous dollar. At this point, the diminishing returns of increasing your score catch up with the chances that you’ll actually get the clue right.

–  $2,400 if you’re supremely confident.  The system suggests the diminishing returns beyond that point are not worth an all-in wager, but I certainly wouldn’t begrudge one if that was your choice.

Chu’s selection of $1,000 is an odd one. It’s not conservative enough if you don’t like the category (which I imagine was Chu’s reasoning), as it leaves you at least two clues behind to catch up if you’re wrong. It’s also not aggressive enough to take advantage of the opportunity that a Daily Doubles represents.

Chu hit the first Daily Double in Double Jeopardy, and again wagered $1,000.  The situation was much different this time, with Chu on a commanding $13,200 over Japinga’s $3,600 and Rider’s $1,800.  Without looking too deep at the details this time, I think the two choices in wagers would be the minimum of $5 if you want to protect your lead, and a more aggressive wager of $6,000, looking to close out the game here but still keep twice Japinga’s score if you’re wrong.  I don’t begrudge Chu his wager that much, since I doubt there was any great difference between wagers of $5 and $1,000. And despite the disclaimer that this could be the stupidest thing she ever did, Rider’s true Daily Double later with her score of $4,600 a long way back of Chu’s $16,600 was the only real move she could have made, especially in a category that she seemed to like.  She answered correctly, and Japinga made a late run to set up a Final Jeopardy where all three players could still take the victory.

The scores were Chu with $17,800, Rider with $12,800, and Japinga with $8,000.  I’ll leave the exact analysis of the situation to Keith at The Final Wager, who does a better job at it than I could ever hope to. But I do want to talk about something that I feel very strongly about which comes into play here: Stratton’s Dilemma.

Coined by Andy Saunders, Stratton’s Dilemma is the term for the situation Rider finds herself in, where she has to choose between two possible wagers. Let’s analyze her situation. We can assume that Chu will wager $7,801 or thereabouts, the amount needed to guarantee his victory as long as he gets Final Jeopardy correct. We must assume that Chu responds incorrectly, otherwise we have no chance of winning.  If Chu is incorrect, he will be left with $9,999. Thus, it is in our best interest to wager no more than $2,800, staying ahead of Chu no matter what our outcome is. However, the presence of Japinga complicates matters.  If Japinga wagers everything and doubles up, he’ll have $16,000.  To ensure that we remain ahead of Japinga in that situation, we have to bet at least $3,201.  Sometimes we can find a wager to satisfy both scenarios, but this is not one of those times. We have to choose one or the other, and know that some of the time we will choose incorrectly and lose when we could have won.  It’s an infuriating position. Which bet should we choose?

Well, let’s break down the scenarios.  Since each player can either be correct or incorrect in Final Jeopardy, there are 8 possibilities to consider.  Assuming that Chu wagers $7,801, and Japinga wagers his entire $8,000 (our worst case scenario), what happens when we bet $0? 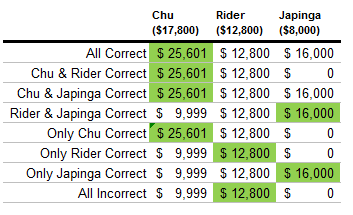 Compare that to what happens when we bet everything: 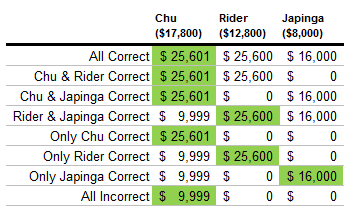 I took a look at 2,184 games played over the last 10 years where all three players made it to Final Jeopardy.  Specifically, I counted the times when each of the above scenarios happened.  I separated the players by their ranking going into Final Jeopardy, so I know how often the leader missed Final Jeopardy while the other two got it right, or only the second-ranked player responded correctly, for example. And what were the results? 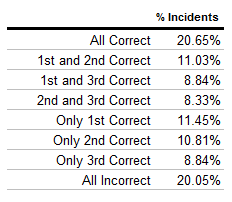 Unsurprisingly, the scenarios when all three players responded correctly and all three players responded incorrectly are more likely than any other case.  Players possess a shared knowledge base, and a question that one person knows is likely to also be known by the others, and vice versa.  The situation we’re hopping happens when we bet big, where 2nd and 3rd place answers correctly but the leader does not, is the least likely to happen. If we quantify our chances of winning using the above table, we have a 30.9% chance of victory with a small bet, while we only have a 19.1% chance of success if we wager big.  I don’t know about you, but if one choice of a dilemma increases my chances by over 60%, I wouldn’t call it much of a dilemma.

Well, we’re going to get the matchup we wanted, Collins vs. Chu. And frankly, this tournament is now Chu’s to lose. Regardless of who wins the next match between Ben Ingram, Joshua Brakhage, and Sandie Baker, I can’t help but see Chu as a strong favorite, especially over a two-day affair where the normally high level of variance inherent in a Jeopardy match is lowered. 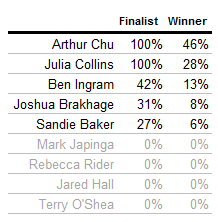