Couple of random thoughts before revealing my predictions for the ToC Semifinals:

– My system did pretty darn well this year, getting 4 of the 5 winners of the semifinals correct. Granted, it wasn’t much of a radical prediction to say that Matt Jackson and Alex Jacob would win their games. However, I’d argue that Kerry Greene, despite nominally being the top seed in her game, was not an obvious favorite, nor would Catherine Hardee be easy to pick out as a favorite to win from the third lectern. The system’s one miss was favoring Greg Seroka and Kristin Sausville over the eventual winner from Tuesday’s game, Brennan Bushee, though to be fair Bushee won the game from last place by being the only player to get Final Jeopardy correct.
– The Wild Card cutoff point was higher than average this year at $14,000. The average over the history of the tournament (after doubling the scores of the pre-double dollars era) stood at $10,464. Anecdotally, I’d think that may be the effect of almost all players going into their games with the goal of not necessarily winning, but playing to hit a self-determined goal score that would earn them a wild card. With much more data out there about things like historical wild card totals, I wonder if this is going to lead to a situation where the wild card cutoff will always be higher than historically expected. Then again, last year’s cutoff was $9,100, and most of the data was available then too, so it’s just as likely there’s no great reason for this year’s cutoff being so much higher.
– I would love to know how the Jeopardy team selects the semifinal matchups. I’ve tried to come up with some set of seeding rules, but nothing I can find explains the matchups perfectly. The only rules that I know for sure are that players will not face their opponents from their quarterfinal match, and two people with the same first name will not play each other. This is different from the quarterfinals, where the games are fairly obviously seeded so that in each match one of the top 5 players (ranked by games and money won) plays one of the second five and one of the bottom five.
– I need to thank Andy Saunders of The Jeopardy Fan for his guesses as to what the semifinal matchups would be, which turned out to be correct and give me a little more time to run the numbers. Jeopardy didn’t officially release the matchups until Monday morning (as far as I saw through the official channels), which is slightly annoying for those of us in the game-show-data-analysis business. 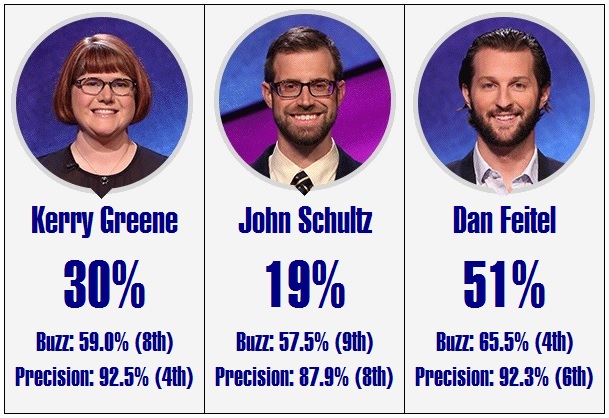 Our prediction of Jackson vs. Jacob vs. [Seroka/Sausville/Hardee] isn’t going to be happening, since neither Greg Seroka nor Kristin Sausville made the second week, and Catherine Hardee is playing Matt Jackson in Wednesday’s game. Instead, the favorite for that third slot becomes Dan Feitel, winner of the Semifinal Matchup sweepstakes. He had the biggest movement in our prediction engine thanks to staying out of the path of the two juggernauts, increasing his chances of winning the tournament from 4% to 14%.

Alex dominated his quarterfinal game, becoming the only player to have a lock game last week. We see no reason to expect a different result from his semifinal matchup against Brennan Bushee and Vaughn Winchell. 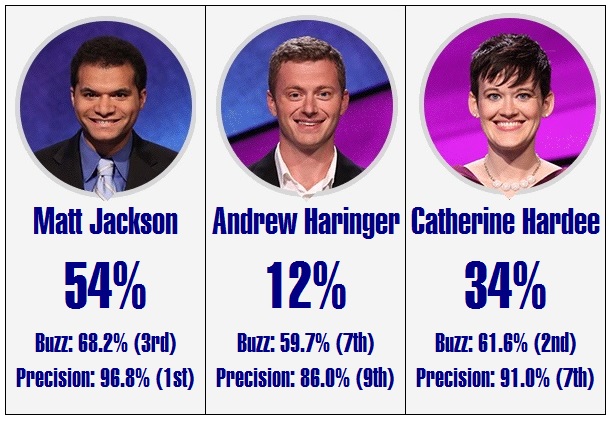 If anybody is going to keep us from a final of M Jackson v. A Jacob v. AN Other, Catherine Hardee has the best chance of doing it. She could actually outbuzz Jackson, possibly the first time he’s ever had to face somebody who could do that.  If she can keep her number of wrong answers down and take a few Daily Doubles, she could still certainly crash the finals.  However, the smart money still has to be on Jackson winning this matchup. 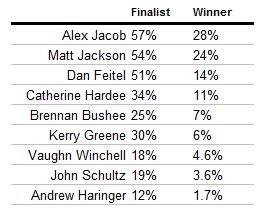 Thanks to a slightly easier Semifinal matchup, Alex Jacob takes the tag of favorite by a clear margin over Jackson. Both men are close to 1-in-4 odds of taking the title. As prevously stated, Dan Feitel moves from his quarterfinal position of “best of the rest” into a solid third place thanks to avoiding the two favorites. Good luck to all participants, and here’s hoping that the games to come are just as fun, interesting, and exciting as last week’s games.