When I suggested in my preview that you could “expect [a] game where a number of clues pass by unanswered”, I didn’t quite mean it to this extent.

Whether it was the material, the players, or the lunch break that would have preceded this taping, the game just never got off the ground. All three players underperformed on their buzzing, and only Terry O’Shea hit her previous level of precision. Thirteen out of the 57 non-Daily Double clues passed by our competitors without a single buzz, not to mention several more that only elicited incorrect responses.  It was a bad day at the office for all parties involved, and unfortunately it cost two of the players their shot at the title.

Normally I’d break down the strategic choices made by the players in this space, but there’s not much to say.  All three Daily Doubles were found by the player in distant last place, all three times the player correctly wagered big, all three times the wager was lost. Drew Horwood finished the match in the red, and didn’t play Final Jeopardy, while O’Shea had a slim lead of $8,800 to Sarah McNitt’s $8,600.  Both bet big, since you’d think their scores wouldn’t be worth a wild card, although this tournament is shaping up to have a low cutoff (again, they wouldn’t know that at the time).  O’Shea bet to lock-out McNitt, and was correct, earning the automatic advancement.  McNitt bet as big as she could, but still kept enough back to win on a Triple (Double?) Stumper, but missed Final Jeopardy.  Her final total of $500 is already known to be not enough to advance.

On a more positive note, with Horwood and McNitt dropping out, we can now welcome Rebecca Rider and Julia Collins into the semifinal fold.  Rani Peffer’s $7,599 is looking pretty good at this point. and Jim Coury’s $5,600 still has a shot of holding up.  We’ll see what happens after the dust settles on tomorrow’s last quarterfinal. 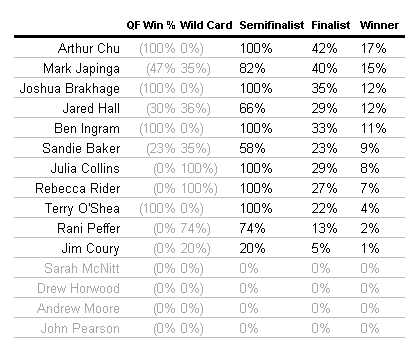