It’s a situation I doubt many could have foreseen.  Julia Collins, 20 game winner, had the game on her racket … and double-faulted.

Today’s game stats matched expectations pretty well, with Jim Coury’s forays into the red being the only real deviation.

Coury found the first two Daily Doubles, and correctly bet as big as he could both times.  He made the first one, helping atone for his poor first round showing, but dug himself a hole after finding his second early in the Double Jeopardy round with his score $3,000 to Collins’ $6,600 and Brakhage’s $4,000.  His true Daily Double backfired, digging himself a hole that he never really climbed out of.

Collins found the second Daily Double very late in the game, setting up a very interesting situation.  She had $10,600, just trailing Brakhage at $11,600 while Coury had revived a little to sit at $2,800.  Given that the clue was in a $1,200 box and should be relatively easy, I might have considered a large wager, looking to take first place and keep hold of it until Final Jeopardy.  Collins opted for a $4,000 wager instead.  Since this is a quarterfinal and wild cards are in play, I agree with the prudence.  The wager is big enough to give you a very good chance of staying in first if you are correct. Worst case scenario, if you get this wrong and don’t answer another clue for the rest of Double Jeopardy, you can still double up your remaining $6,600 to set a quite decent wild card score.  In the end, she answered correctly, and did carry the lead into Final, with a score of $16,200 to Brakhage’s $11,600 and Coury’s $2,800

While Coury had an obvious bet (everything), both Collins and Brakhage were faced with dilemmas.

Collins’ traditional lock-out wager of $7,100 gives her the best chance of winning the game outright, but risks losing a wild card spot if she gets it wrong and loses to Brakhage.  If we assume that Brakhage bets for the win (not necessarily a correct assumption, see below), then Collins will win the game with a lockout wager if either she answers Final Jeopardy correct or Brakhage gets it wrong, a situation which happens on average about 80% of the time.  If she loses, the remaining score of $9,199 would be good for a wild card about 40% of the time (using our estimations from before the tournament, not taking into account the scores already seen this week, as Collins does not know about them at this point.). Together, wagering $7,001 adds up to an 88% chance of advancing.

However, what about a bet of $0?  I’d expect a score of $16,200 to earn a wild card spot about 84% of the time.  But Collins could still win even with a bet of $0, since Brakhage still has to answer correctly.  The average get rate for Final Jeopardy is around 50%, so we’ll use that as the chances that Collins will still win.  Combining these chances leads to a 92% chance of success.  Considering that the best case scenario for a lockout wager grants only an 88% chance of survival (possibly less, if Brakhage bets small), and I think a tactical $0 wager (or maybe a couple hundred in case Brakhage bets to just cover your total) is the best option here.

Brakhage has a similar situation to consider, as he has to bet at least $4,601 to guarantee a chance at victory. If he bets that, he’ll win the 20% of the time he answers the question correctly and Collins misses (assuming she’s betting for the win). In the remaining 80% of the time, he’ll answer correctly in half of the cases and be left with a very good shot at a wildcard (84%), and in half of the cases he’ll miss and be left with $6,999 (a 26% chance of earning a wild card). Total chance of advancing: 64%. If he stays pat and hopes his $11,600 is good enough, he’ll advance 57% of the time, assuming Collins also bets less than the difference between the two of them giving Brakhage no chance to win  However, both of these percentages swing wildly based on what Collins chooses to do.  If she bets big, Brakhage should bet small, while if Collins bets small, Brakhage should bet big. It’s a mind games situation.

In the end, Coury doubled up, Brakhage bet to cover Collins’ score and answered correctly, while Collins … bet to lock out Brakhage … and whiffed.  Brakhage takes the automatic semifinal spot, and Collins is left hoping that $9,100 is enough to get her into the second week.  She had no way of knowing this, but $9,100 is enough to put her second on the wild card list with two games left to play.  She might still be alright. 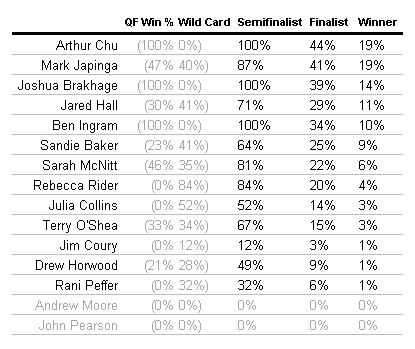 Not much change in the odds.  Andrew Moore and John Pearson are now officially out. Brakhage moves up after guaranteeing his semifinal slot. Julia Collins still has a better than even money shot of making the next round. Jim Coury takes up residence on the wild card bubble with $5,600, which is unlikely to be enough.

Tomorrow’s game is Drew Horwood vs. Terry O’Shea vs. Sarah McNitt. We’ll know the identities of six of the nine semifinalists after the game.  Check back here for all the gruesome and over-complicated details.