Jeopardy tournaments are a harsh mistress.  One bad game, and you’re out on your backside.

Arthur Chu’s performance was nothing less than I expected from him coming into the game.  It was Andrew Moore’s underachievement (and to a lesser extent Rani Peffer as well) that turned the game into a blowout for Chu.

My gut instinct on Daily Doubles in the Jeopardy! round is to always bet aggressively.  When Moore found the Daily Double after he and Chu went on a wild goose chase for it, most of the high-dollar clues were off the board and the two of them were tied at $2,600, with Peffer trailing at $600.  Moore opted to bet only $1,000, and after analyzing the situation, I’m inclined to agree with him.  Given that the DD was hidden in the $1,000 space (indicating a harder clue), and that most of the money had been stripped from the board, a modicum of restraint was to be called for.

However, the situation was different when Moore found the first DD in the Double Jeopardy round early on.  He had a slight lead at the moment, $5,600 to Chu’s $5,200 and Peffer’s $2,200.  It’s a close decision, but this would have been the time to make a move.  A wager of all or almost all of his money would have given him the opportunity to take a stranglehold on the game with only one DD left on the board.  He instead chose to wager $2,000, and perhaps this was the right move, since he missed the clue.  After that stumble, Chu went on a hell of a run, and by the time he found the 2nd Daily Double late in the round, he had an unassailable lead.

Not much to say here.  Chu had a lock on the game, and could sit this one out.  Moore and Peffer knew their current scores wouldn’t hack it, so each bet everything but $1.  Moore missed, and has gone from our favorite to all but out in the blink of an eye.  Peffer nearly doubled up, and takes the #2 spot on the wild card list for the nonce with $7,599.

With our favorite knocked out of contention, there’s no surprises who took over at the top of the list. 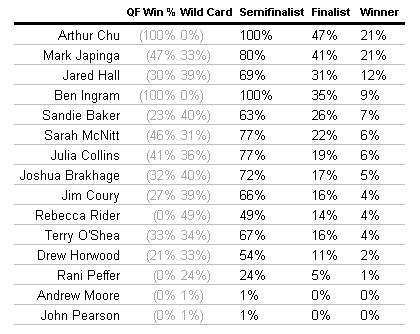 A bit of change elsewhere on the list.  With Moore no longer a potential hurdle, many people saw their chances of getting to the finals and winning increase.  Two wild card scores coming in under expectations increases the chances of the people yet to play of taking a wild card.  Rebecca Rider’s score in the clubhouse of $11,600 is looking better; she’s even money to advance now.

Arthur Chu has dropped the gauntlet.  Will Julia Collins pick it up tomorrow and keep the chances of everybody’s dream matchup alive? Check back tomorrow for the analysis.