Trivia Christmas is coming a bit early this year. Instead of the usual 18 month wait between events, we’re getting another installment of the Jeopardy Tournament of Champions a mere twelve months since the last incarnation. It’s always fun to try to predict how these things will go, so we’ll see if we can better our efforts from last year, where we had eventual winner Ben Ingram rated as the fifth most likely winner in a fairly wide-open field. This year, however, the field has broken down into three distinct groups.  The field is led by two co-favorites, each of whom have a one-in-five chance of victory.  There are three dark horse candidates for the title, with chances of victory ranging from 11% to 14%. Finally, we have the remaining ten contestants, none of whom have more than a 1-in-25 chance of taking home the title.

Before we reveal our predictions, let’s do a quick recap of our methodology. We analyse players’ ability using two metrics. The first is Buzzer Percentage, which attempts to measure how often a contestant will buzz in. Since we can’t measure this directly, we use a Monte Carlo simulation to estimate it based on how often a player has successfully rung in during their previous games. The second metric is Precision, which is the percentage of times that they are correct on clues where they buzzed in (ignoring Final Jeopardy & Daily Doubles). For reference’s sake, the average Jeopardy contestant has a buzzer percentage around 60% and a precision around 87%.  This system is based on the system that the designers of Watson used to simulate human opponents for Watson to practice against.

Once we have those numbers, we run a bunch of simulated games using each player’s Buzzer Percentage and Precision, and determine how likely they are to win their quarterfinal games. Using the results of these simulations, we track how likely a contestant is to win their quarterfinal or qualify for a wild card, and use that to weight a player’s potential matchups in the semifinals and finals.  Here’s what our simulation gives us for each of this week’s quarterfinal games: 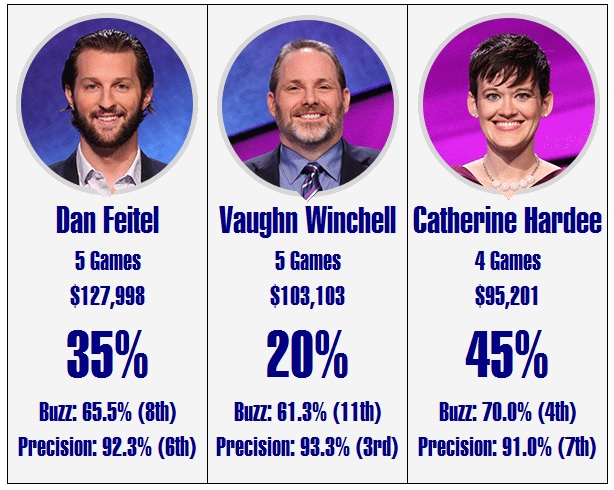 If you want a dark horse candidate for your those office Jeopardy pools I know you’re all in, Catherine Hardee is a decent candidate. Despite winning one game fewer than Dan Feitel and Vaughn Winchell, her strong Buzzer Percentage and respectable precision gives her a slight edge in Monday’s matchup. 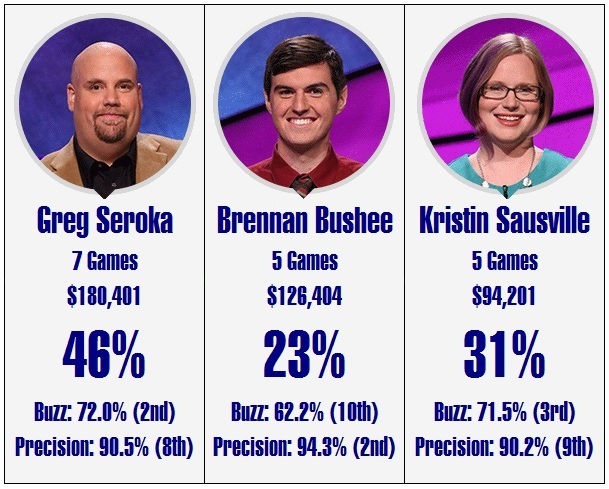 Two of the three dark horse candidates face off on Tuesday’s show. Greg Seroka and Kristin Sausville both have a decent chance of taking down the whole tournament. Brennan Bushee is a bit unfortunate in his draw; despite his strong precision he could get squeezed out by two of the tournament’s strongest buzzers. 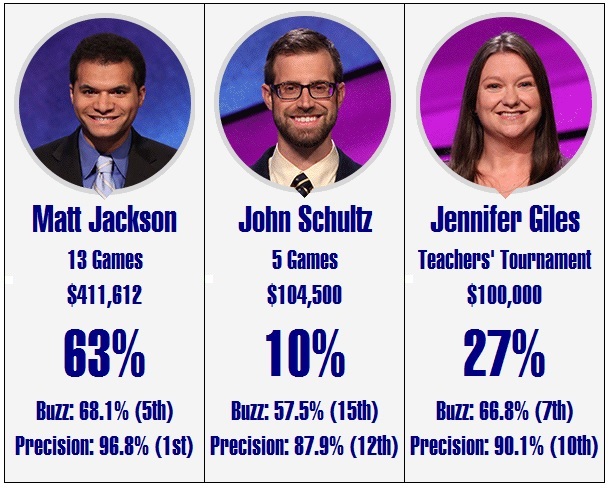 96.8% precision. Ninety-six point eight percent precision. That is a crazy, insane, whacked-out number, and helps make Matt Jackson, unsurprisingly, one of the favorites for the tournament. Jackson draws a fairly easy group for his first game. John Schultz’s metrics are among the weakest in the field, and are actually comparable to an average contestant. Jennifer Giles could take an upset win, and in doing so become only the second Teacher’s Tournament winner to make the second week.  The first, of course, being Colby Burnett, who won the whole thing in 2013. 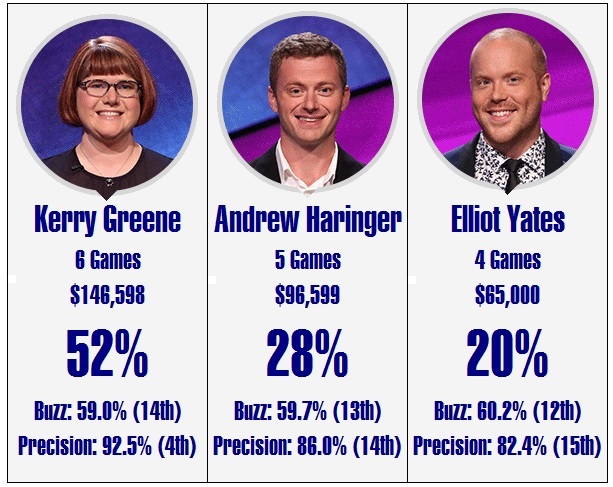 There’s no nice way to put this: the lineup for Thursday’s match is by far the weakest. All three contestants are very conservative buzzers; expect a higher than average number of clues going untried. Kerry Greene is at least precise when she buzzes in, which gives her quite an edge over the error-prone Andrew Haringer and Elliot Yates.  Any way you slice it, this game will give an automatic semifinal berth to a player who may have had a hard time qualifying in other games. 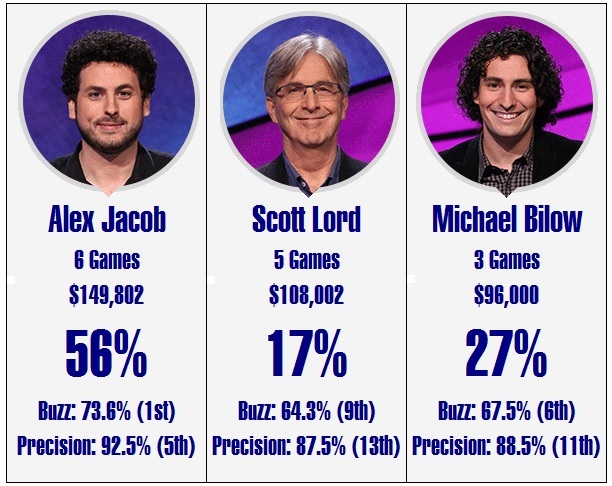 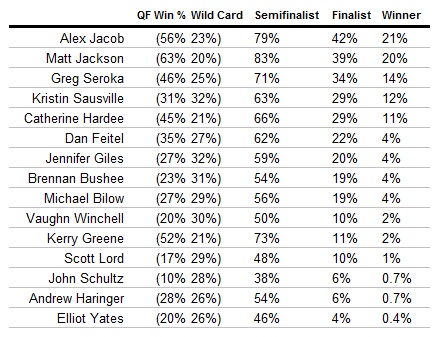 Alex Jacob and Matt Jackson are so close that it’s fair to call them co-favorites to win the tournament.  Assuming that they manage to avoid each other in the semifinals (which is what caused most of their eliminations in our simulations), they should get to lock horns in a great two-day final.  Chances are they’ll meet one of Greg Seroka, Kristin Sausville, or Catherine Hardee there.  At that point, the only winners I’d be willing to predict for certain would be the audience, who would get to watch an exhibition in excellent Jeopardy gameplay.