ABC’s latest Big Event Game Show Thing, 500 Questions, is currently in the middle of its nine night run.  And while pundits are keeping tabs on whether or not the show will actually manage to ask 500 questions during its entire run (spoiler alert: no), a question asked on the LearnedLeague forums got my attention.  A user asked what the chances were of a contestant actually completing the titular 500 questions.  That sounds like something we can look into.  So, we’re starting a new series here at Game Show Theory, The Lightning Round, devoted to questions about game shows that are interesting, but don’t really qualify for a full strategic breakdown.

Let’s have a quick refresher of 500 Questions’ rules.  A contestant is asked trivia questions one at a time, up to a theoretical total value of 500 questions.  Answering them correctly can earn money, which they secure after every 50 questions.  However, if they ever miss three questions in a row, they’re off the show.  There are some different types of question, and the presence of another player who may occasionally make life difficult for the contestant, but for our purposes we are going to ignore their effect on the game. 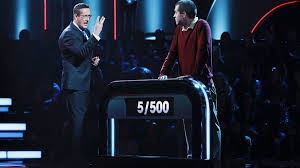 Question 5: How many fingers am I holding up?

Let’s work through an example.  Let’s assume a prospective contestant will give a correct answer to a question a respectable 60% of the time.  Figuring out the chances of surviving the first two questions is trivial – it’s 100%, since there is no way to get three wrong answers in a row yet.  The first chance of losing comes at 3 questions.  The player would have to get the first three questions wrong in a row, which translates to 3 straight 40% shots:

The chances that the player would go three-and-out is 6.4%, meaning that 93.6% of the time they’re still in the game after three questions.

With that done, let’s work out the chances that the player bombs out after 4 questions.  You might initially think at first that it’s the same as above, 6.4%, but actually there’s a couple of wrinkles we have to consider.  First of all, we need to factor in the chances that they’ve already been defeated, since you can’t lose after 4 questions if you’ve already lost after 3 questions.  Secondly, losing at 4 questions not only requires the contestant to have gotten questions 2, 3, and 4 incorrect, but also must have gotten question 1 correct.  If Question 1 was answered incorrectly, there is no way the player can get three in a row wrong on question 4.  Either they answer questions 2 and 3 wrong, in which case they’ve already been eliminated, or they answer one of those questions correctly, in which case Question 4 can’t be the third wrong answer in a row.

This gives us the following formula:

Calculating the odds of losing on questions 5 and beyond can be calculated in the same way as question 4.  We multiply the chance that we are still in the game at that point by the chance of answering one question correct and three questions wrong. 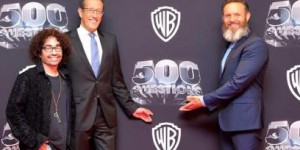 As you might imagine given the results so far, the results do not make pleasant reading for our hypothetical player.  They only have a 50% of getting to question 19, well before they have the chance to make any money.  They’re only going to be able to bank the money earned in their first 50 questions 14.8% of the time.  And the chances of getting through all 500 questions?  0.0000003%.  That’s about a 1 in 300 million chance,  meaning they have as much chance of surviving 500 questions as they have of dying  as a result of a shark attack.  Put another way, our 60% contestant should stick to playing Powerball – they’ll have about twice the chance of winning the jackpot there.

What if we increase the contestant’s average question get rate?  Here’s a chart that breaks down the chances of players of different strengths hitting the 25, 50, 100, 250, and 500 question milestones:

If a player wanted to have a 50/50 shot of getting through the 500 questions, they need to be very, very good.  A player would have to get 88.37% of their questions right to stand a break-even chance of finishing the game, a number I would expect only trivia elite could get close to achieving.

One of the decisions that the producers of 500 Questions have made is to be outspoken in calling their contestants geniuses.  They better be – only geniuses stand a chance of performing well.